Will you survive the Nullus Manor?

After a near fatal collision with a deer on a backwoods road, Noa finds herself at an eerie manor in search of help.

Project Nullus started as an idea I had for a combat system and evolved into this JRPG-ish Horror Survival thing.

This is a concept demonstration of the themes, mechanics, and style intended for Project Nullus. It is super buggy and still contains some place holder assets, please understand.

Your feedback is much appreciated.

Your Speed Meter is constantly ticking up. You can only use an action if the meter is at 100%. Your different actions will drain varied percentages of Speed.

Enemies also have a Speed meter displayed above their heads. When an enemy attacks there is a moment where their Speed Meter "charges" possibly allowing a chance to interrupt or block the attack.

The Health Meter is your lifeline. Each time you take damage it will be drained from your Health, if it reaches 0 its game over.  Health can be restored with Food items.

When your health is low you may gain an Adrenaline Boost causing you to do extra damage.

Enemy health is displayed above their heads when they take damage.

The Guts Meter is required for certain actions. If you're low on Guts you may not be able to attack. Guts can be restored through Guarding or using Food items.

Blade attacks deal moderate damage and may interrupt and enemy attack while they're "charging." They cost Guts and Speed, and require the player to perform and "Action Command." Damage is determined based on the player's "Action Command" performance.

Use Food or Combat items. Items from your bag have an instant effect and require no Speed. 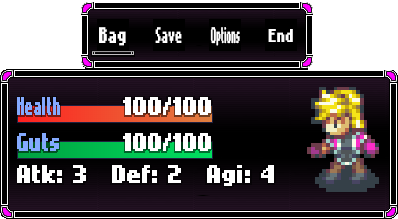 The Bag contains the items you collects.
Food is usable both in and out of combat.

Save your game. (May be buggy)

Tweak the games options such as Fullscreen mode or the rate of the Speed bar.

Return to the title screen.

Good Luck!
Have Fun!
&
Thanks for Playing!

P.S. If you like table top card games check out my other project
Bellum: Of Mutants and Men

Download It, Run It, Play It
Currently only available for Windows. 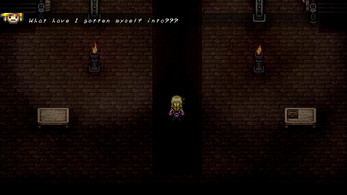 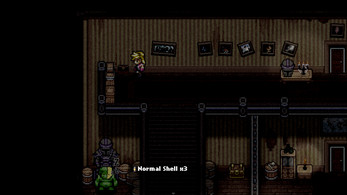 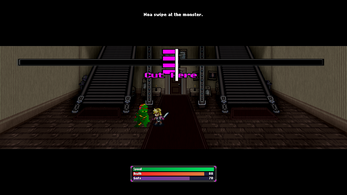